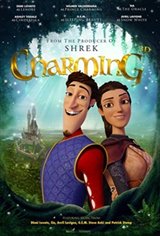 Prince Philip Charming (Wilmer Valderrama) was cursed as a child by Nemeny Neverwish (Nia Vardalos) to be irrestible to every woman he meets—but if he doesn't find true love by the time he turns 21, the curse will be sealed and all love will disappear from the kingdom forever.

As his 21st birthday approaches, he's engaged to three princesses—Cinderella (Ashley Tisdale), whom he met at a ball; Snow White (Avril Lavigne), whom he saved from a poisoned apple; and Sleeping Beauty (G.E.M.), whom he woke from a hundred-year sleep with a kiss. However, none of them realize they're engaged to the same man.

To break the curse, his father sends him to run The Gauntlet to Fire Mountain, the same journey he took when he met his true love, Philip's late mother. Unfortunately it was on that same journey that he broke the heart of his trusted guide, Nemeny, who was so jealous that she became consumed in dark fairy magic and vowed revenge. If the prince can get a kiss of true love on the last day before his 21st birthday, the curse will be broken.