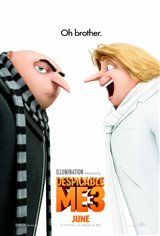 Gru discovers from his mother that he has a twin brother, Dru, whom he's never met. Dru was given to his father to raise after their parents' divorce. Brothers Gru and Dru (both voiced by Steve Carell) finally reunite.

Meanwhile, former '80s child star Balthazar Bratt (Trey Parker) has been bitter since puberty, when his TV series was abruptly cancelled. To exact revenge for what he sees were unjustified wrongdoings, he hatches a plan for world domination.

To stop him, Gru, Dru, Gru’s wife Lucy (Kristen Wiig), their children, and the Minions must band together.