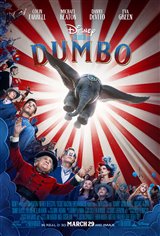 This live-action remake of the 1941 animated classic finds director Tim Burton at the helm of the story of Dumbo and his incredible ears.

Former trick rider Holt Farrier (Colin Farrell) returns wounded from the war to take care of his children, Milly (Nico Parker) and Joe (Finley Hobbins), whose mother died while he was away. The children take an interest in a newborn elephant with overd ears and discover the baby elephant has the ability to fly.

Seizing what he sees will be a profitable opportunity, circus owner Max Medici (Danny Devito) Medici puts the elephant, dubbed Dumbo, in the show and attracts huge audiences. However, when a slick entrepreneur (Michael Keaton) gets wind of what Dumbo can do, he signs Medici up as a partner, recruiting the talented elephant and the rest of the circus folk for his massive entertainment venture, which he calls Dreamland.

There, Dumbo performs alongside aerial artist Colette Marchant (Eva Green), but the kids and Holt soon learn that Dreamland is anything but a dream come true.