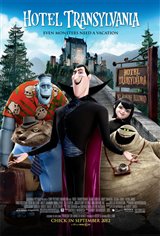 Sometimes monsters need a break too. That's why Dracula (voiced by Adam Sandler) opened Hotel Transylvania, a five-star resort where monsters and their families—including Frankenstein (voiced by Kevin James) and his bride, the Mummy, the Invisible Man, and a family of werewolves—can live it up without worrying about frightening or offending anyone in the human world.

Although he's a monster, Dracula is much like any other overprotective dad when it comes to his teenage daughter, Mavis (voiced by Selena Gomez). He makes up stories about terrible dangers in order to keep her from wanting to venture outside of the hotel. But that doesn't stop dangers from coming in.

Dracula's world starts crumbling when an ordinary human guy (voiced by Andy Samberg), manages to find his way into the hotel and happens to fall for Mavis.