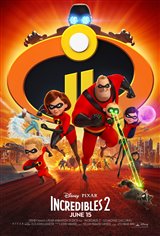 A private company launches a campaign to bring Supers back into the sunlight in order to change people's perceptions about superheroes. It's decided that Helen Parr (voice of Holly Hunter), a.k.a. Elastigirl, will be their best option. Her promotion means the family gets to move to a beautiful new home, but it also means that Bob Parr (voice of Craig T. Nelson) has to stay at home and run the household, including taking care of the kids—Violet (voice of Sarah Vowell), Dash (voice of Huck Milner) and baby Jack-Jack—whose super powers are about to be discovered.

Bob struggles as he has to help the children with their homework, keep them fed and most importantly—make sure Jack-Jack doesn't destroy anything with his new abilities. Their friend Lucius Best, a.k.a. Frozone (voice of Samuel L. Jackson) is also in the picture to give Bob some support. When a new villain emerges, the entire Parr family, along with Frozone, jump back into action alongside Helen to save the world.