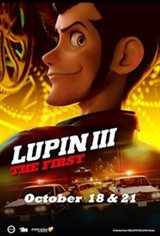 Arsene Lupin III, like his grandfather before him, is a famous thief who likes to announce his heists in advance to make them more of a challenge. He goes on a great adventure to uncover French archaeologist Professor Bresson's golden, mechanical diary, which contains the secrets to everlasting energy and was hidden when Bresson's family fled the Nazis during WWII.

The Bresson Diary is now on display at the Musée de Paris and is about to go up for auction. Lupin announces to his nemesis, Interpol agent Zenigatahis, that he plans to steal it. Also plotting to get her hands on it is aspiring archaeologist Laetitia, who's being manipulated by her grandfather Prof. Lambert and an exiled Nazi named Geralt. Laetitia and Lupin team up to find out the truth about the diary.