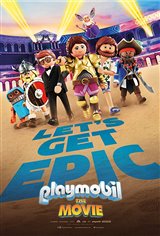 Marla (Anya Taylor-Joy) and her brother Charlie (Gabriel Bateman) unexpectedly find themselves transported into a living and animated world of Playmobil toys. Separated from her brother, Marla gets help from a local named Del (Jim Gaffigan), a man with connections to the kinds of people who can help find Charlie, like super spy Rex Dasher (Daniel Radcliffe). They soon learn that Charlie isn't the only one to have gone missing over the last few months.

When they find out that Charlie has been captured along with the other missing Playmobil citizens by the forces of Emperor Maximus (Adam Lambert) to be unwilling participants in gladiatorial style games, the trio set out on an adventure to reunite the siblings and find their way home.